Immerse yourself on an incredible journey covering two fascinating countries, Japan and South Korea. Discover South Korea’s capital city, Seoul. Seoul is Korea’s financial, political, commercial and cultural centre with over 600 years of history. Travellers can explore the many archaeological sites and temples before enjoying the beautiful natural landscapes this country has to offer. After an enchanting tour of South Korea, you will explore one of the most beautiful countries in the world, Japan. Discover a new level of cool with a journey through cherry blossoms, mountains, bustling cities and ultimately, history. The combination of places visited in these two countries will provide you with an unforgettable life-time experience. Make sure you are packing already! 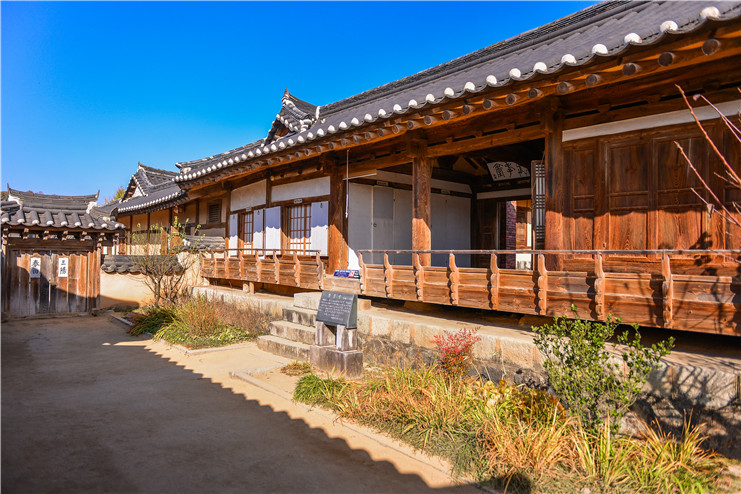 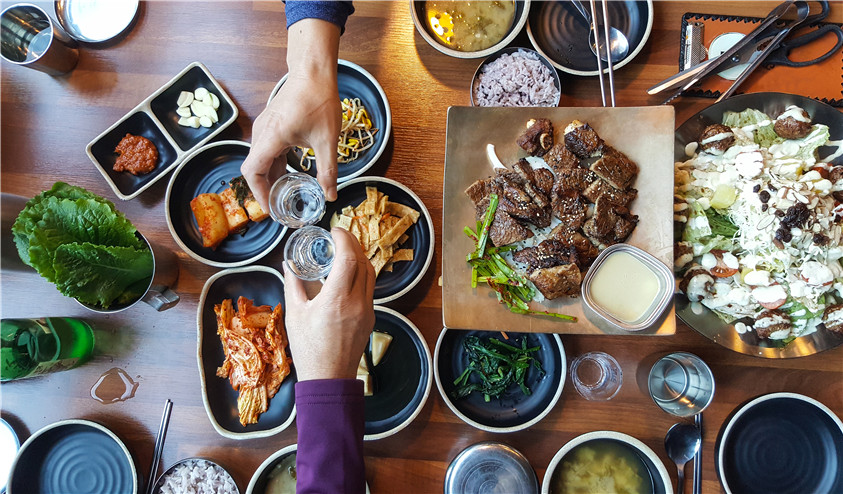 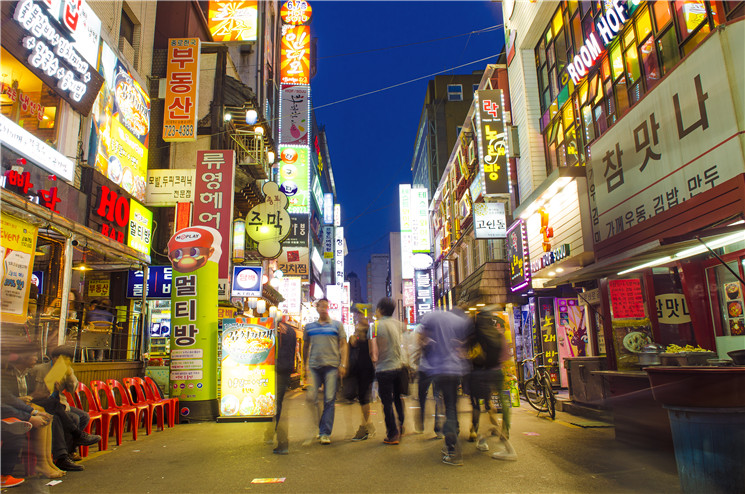 Myeongdong
Immerse yourself in the bustling crowds of Myeongdong, one of Seoul’s main commercial districts 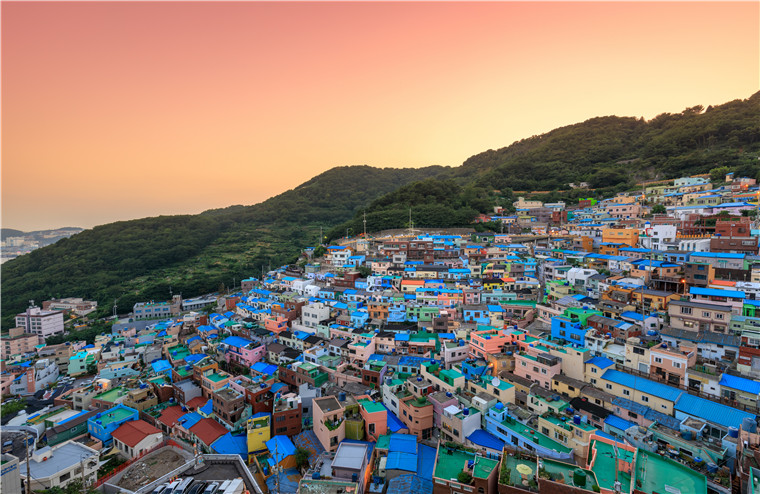 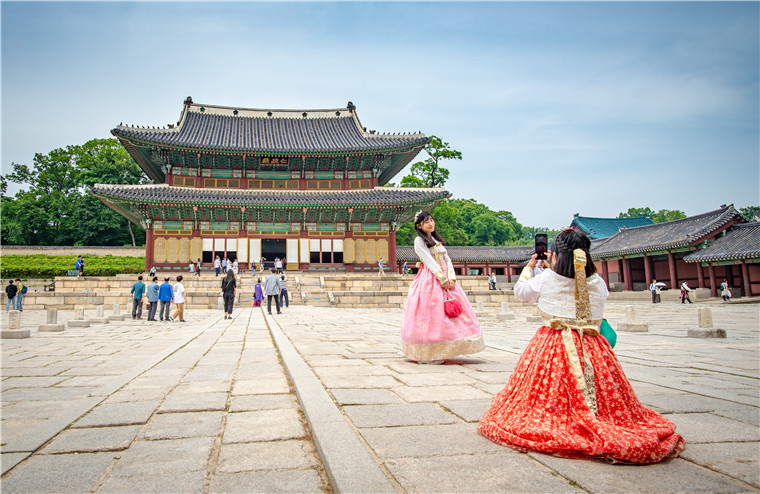 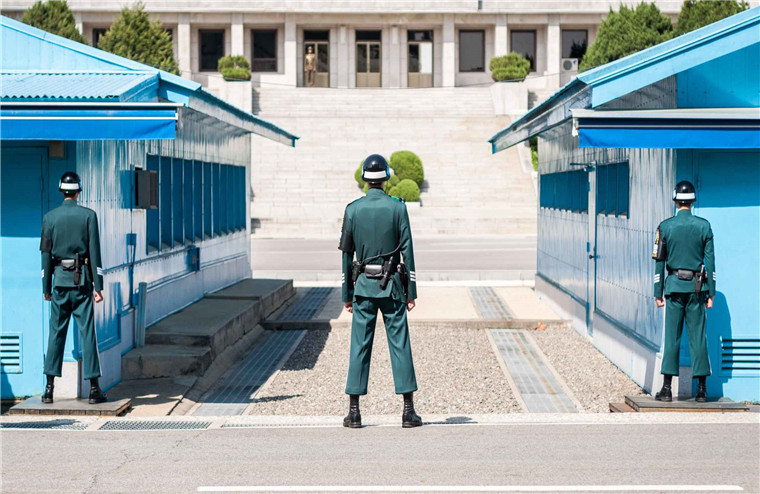 Board an overnight flight to Seoul.

After arrival, transfer to the hotel, and the rest of the day is on your own.

Visit the traditional village, Andong, which features traditional houses of the Joseon Dynasty period (1392-1897). Then transfer to Busan, stop at one of Korea’s largest markets, Nampo Dong Gukje Market for a wide variety of goods at affordable prices. Then visit Nurimaru APEC House, a memorial hall and prestigious international conference hall located near Haeundae Beach, offering visitors spectacular views of the nearby natural landscape. Museum, Bulguksa Temple, and Seokguram Grotto Temple. Enjoy the special Samgyetang Lunch (Chicken soup with ginseng). Then transfer back to Seoul. 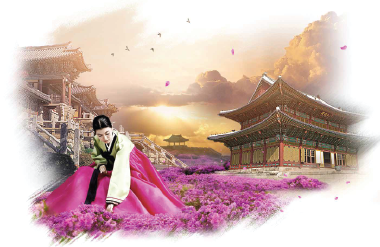 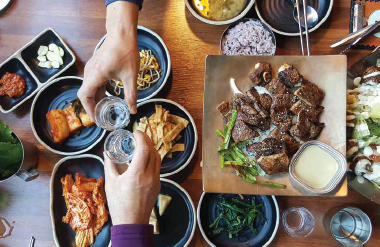 In Busan, we visit Haedong Yonggungsa (East Sea Dragon Palace Temple), situated on the coast of the north-eastern portion of the city and overlooking the ocean. Afterwards, you will have an opportunity to view the waves while looking down through the transparent floor of the 15 metre high Oryukdo Skywalk, which is set over a 35 meter-high coastal cliff. Travel to Gamcheon Culture Village situated on the foothills of a coastal mountain and nicknamed ‘Machu Picchu of Busan’. You will be thrilled by the many alleys cutting through this village, vibrantly decorated with murals and sculptures created by the local resident. Then transfer to Daegu to visit Gatbawi Shrine, which is a medicinal Buddha shrine and national treasure, some 850m above sea level and said to date back to AD 638. Then take a stroll in Dongseongno Shopping District, a major fashion retail district. The streets are packed with hundreds of stores full of personality that reflect the city’s fastpaced fashion trends. 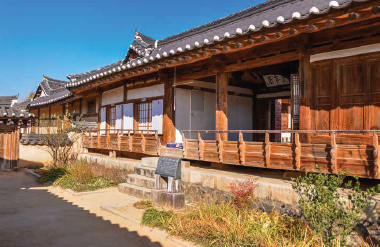 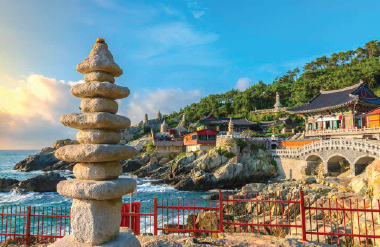 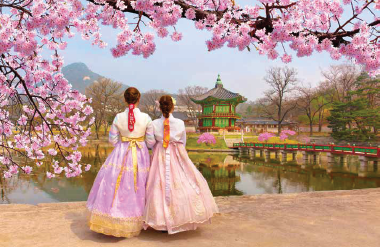 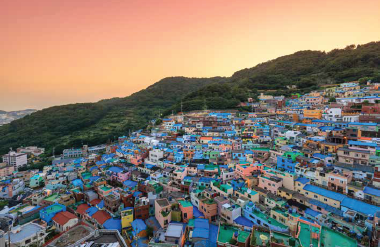 This morning, visit Changdeokgung Palace, one of the ‘Five Grand Palaces’ built by the Kings of the Jeoson Dynasty, and Insadong, a street full of traditional Korean antique and art shops, restaurants and tea houses. Here we will visit the Ginseng Centre and Cosmetic Shop. Continue to Cheonggyecheon Stream and admire this urban oasis before visiting Myeongdong, one of Seoul’s main commercial districts. 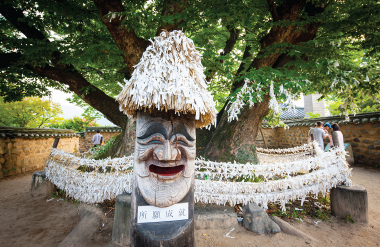 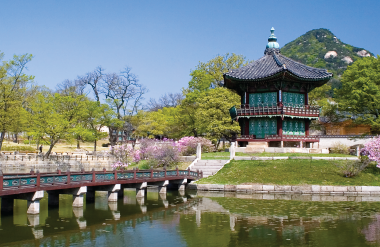 Today is free on your own or join the optional DMZ tour with lunch. Visit North Korea’s 3rd Infiltration Tunnel, located within the Demilitarised Zone (DMZ), a 44 km drive northwest of Seoul. In the event of an invasion from the North, an entire infantry division could have move through the tunnel in an hour. View North Korean territory, including the Propaganda Village, People’s School, and Gaeseong City – the old capital city of the Goryeo Kingdom – from the Dora Observation Platform. Also visit Freedom Park, dedicated to the 5 million people who left their families and homes in North Korea. North Hall contains displays of North Korean lifestyle. Later, try on a hanbok, the traditional attire of the Korean people at Namsan Hanbok Culture Experience Centre before experiencing the city’s best night view at Namsan Tower. 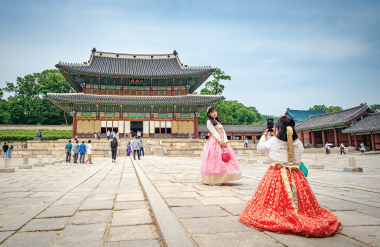 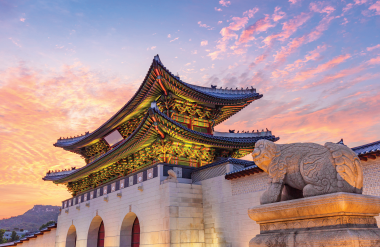 After breakfast, transfer to the airport to board your flight to Canada. 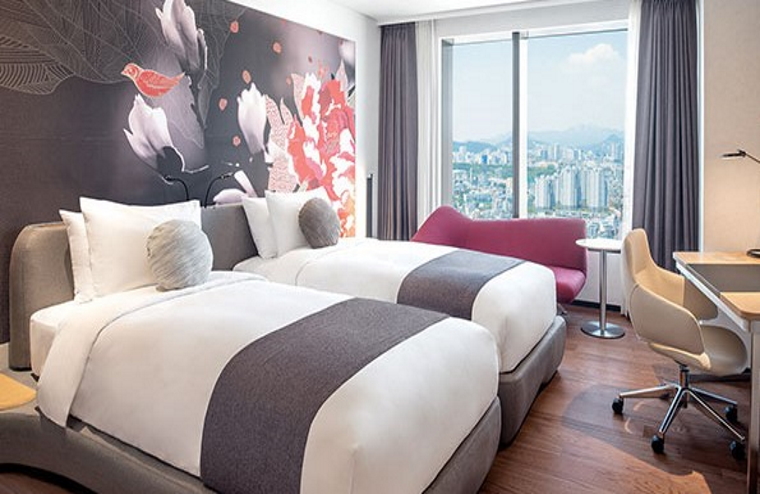 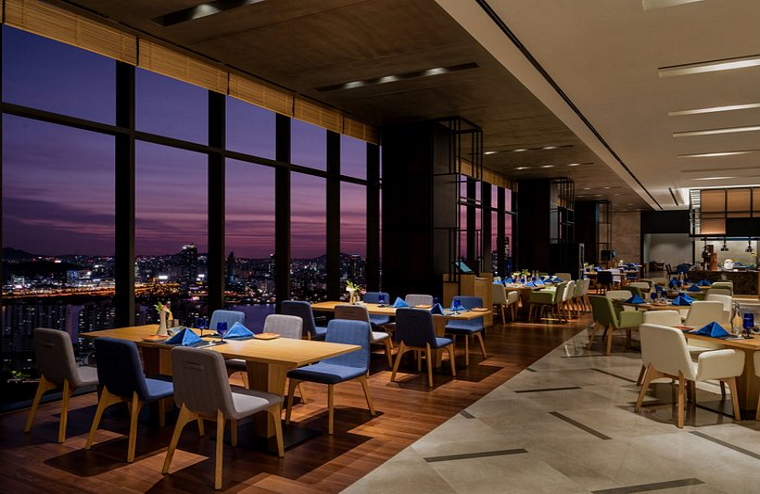 Previous Next
Day 2,5-7
Novotel Yongsan Seoul
4 Nights
Novotel Ambassador Seoul Yongsan is located in Seoul Dragon City, a lifestyle hotel-plex in Yongsan. Our hotel features an Executive Floor Lounge on level 40 with views of Seoul, which provides direct access to a unique structure suspended between two towers filled with entertainment outlets and the most extensive meeting space capacity among hotels in Korea. You will also be able to enjoy the convenient facilities such as a fitness centre and indoor swimming pool during your stay here. 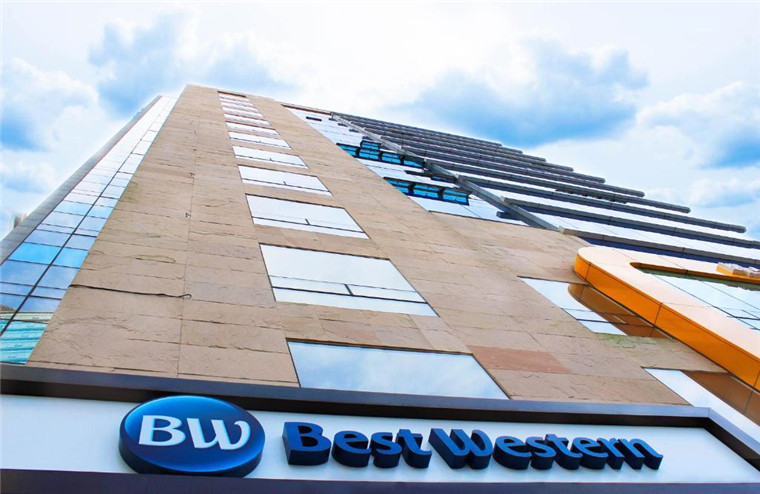 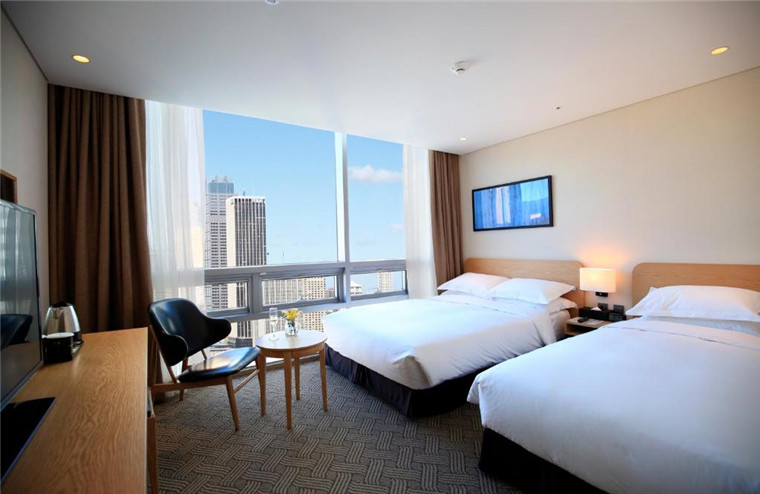 Previous Next
Day 3
Busan Best Western
1 Night
Conveniently located just 100 m from the popular Haeundae Beach, Best Western Haeundae Hotel offers free WiFi in all areas and a 24-hour front desk. Each room at this hotel is air-conditioned and is equipped with a flat-screen TV with cable channels. Units include views of either the city of sea. All rooms come with a private bathroom with free toiletries and slippers.
* In case the advertised hotels are not available they will be replaced by alternative hotels with the same quality.

Previous Next
Day 14
DMZ Day Tour
95 USD
Visit North Korea’s 3rd Infiltration Tunnel, located within the Demilitarised Zone (DMZ), a 44 km drive northwest of Seoul. In the event of an invasion from the North, an entire infantry division could have move through the tunnel in an hour. View North Korean territory, including the Propaganda Village, People’s School, and Gaeseong City – the old capital city of the Goryeo Kingdom – from the Dora Observation Platform.

Return international airfares from Vancouver (Add-on $300 for departing from Toronto);

Sightseeing per itinerary in a modern air-conditioned motor coach

Price Does Not Include 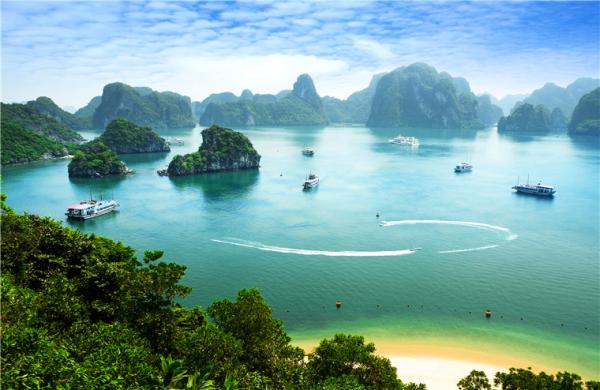 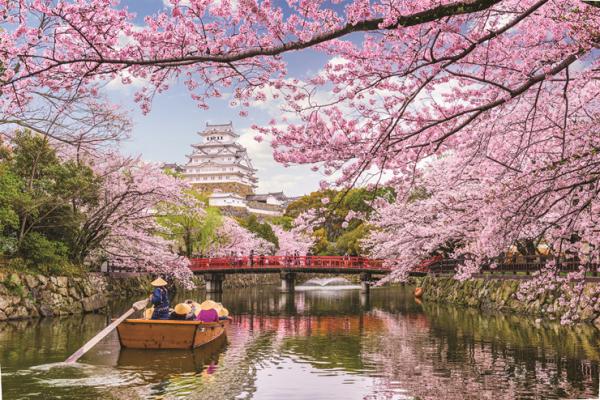 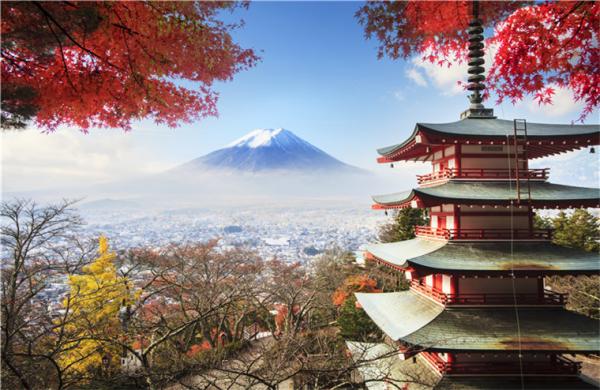 Become Part Of The Tripoppo Family
Copy the code below and paste it onto every page of your website. Paste this code as high in the of the page as possible: Additionally, paste this code immediately after the opening tag: